Through my drawings, I want to express the dynamic of life. Beyond the details, I try to capture the great currents of strength that I see in the faces and landscapes that fascinate me. The movements of nature are translated by abstract forms, an expression of the forces that oppose and complete each other in a seamless dance of contradictions.

Both smooth and hard, graphite creates a resistance against the paper, which allows me to feel and sculpt the lines, to capture this life energy in all its force, violence and sensuality.

I hope that my drawings enable their viewers to recognise the vitality, the strength and the harmony that exists within themselves. 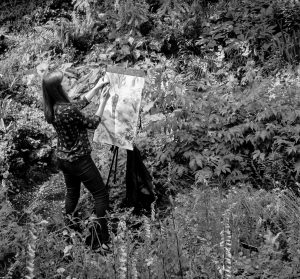 I live and work in Paris

The beauty of nature captivates me. I see it in its light and its structure. Through my drawings, I try to capture and transmit this emotion. I generally draw in situ, allowing myself to be guided by places inhabited by a particular elemental force. Through contact with nature, I draw a force through which I feel connected with the world.

Initially set on a career in journalism, in 2004 I decided to dedicate myself entirely to drawing.

It was in the studio of Chilean painter–sculptor Juan Luis Cousiño that I learnt the fundamentals of my creativity. Inhabited by his art, his sensibility, acuity and rigour always fascinated me.

Leaving behind a whole life in Paris, I left to join my drawing teacher, by then in Montpellier, in order to learn with him the art that so enthralled me. Without realising it at the time, I experienced the ancient situation of philia, a deep friendship around a quest for truth, in which master and student confront each other even in the minutiae of everyday life. For a year, it was as though the sun of the South burned away the carapace of all the intellectual ideas I had learned in journalism and as a student, to immerse myself in the sacred moment of creation. Over the same period, I also worked as a companion for a person at the end of her life. I lived each day with a particular intensity, with an acute awareness of the finite, which, strangely, helped me put my ego to one side in order to relinquish my certitudes and enter the path of drawing.

When I returned to Paris, I set up a studio workshop in my neighbourhood to teach the basics of drawing such as I had learned them, simply drawing fruit.

Later, at Philippe Jourdain’s figurative sculpture workshop at the City of Paris’ fine arts studios, I looked for the meaning of the tension of the line and of volumes within space.

Through numerous trips, I completed my education in Italy and Greece at the feet of the masters of the Renaissance, as well as at the Louvre in Paris.

I feel that an artist transforms their wounds and existential anxieties into beauty, thereby showing us that any transformation is possible. They offer a means of recognising oneself and, above all, of surpassing oneself.

From this process of transfiguration comes the expressive force of the art, which particularly moves me in the intensity and purity of the sculptures of Ancient Egypt and Mesopotamia, in Cretan painting or Romanesque art. But also in the power of Masaccio, the grace of Leonardo da Vinci, and through Van Gogh’s almost physical connection with the elements.

I draw to transmit a vision of nature, a dynamic that is in perpetual renewal. A dance, a rhythm, that both carries us along and evades us.

Depuis 2017 : President of the Drawing Section of the Salon d’Automne, Champs-Elysées, Paris, France

2017-2021 : Selection of artists from the Salon d’Automne at the National Art Center de Tokyo, Japan

2003 : Master 2 at the Institute of European Studies at Paris VIII University, France

2001 : Master 1 of Modern Literature at the Sorbonne-Paris IV and at the Freie Universität in Berlin, Germany

2003 : Master memory – The sanctification of public space through art